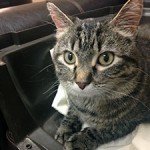 Night Patrol at the Rainbow Bridge. Starler is an advocate for shelter cats. She joined Kish and her family when she was just an 8 week old kitten. She was a stray and was Feline Leukemia Positive. This disease prevents many cats and kittens from being adopted since it shortens their life span and is contagious to other cats. But Starler found her way to Kish’s family and she lived a wonderful life. She now works security at the Rainbow Bridge. 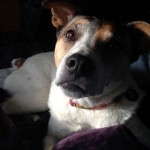 Leash reactivity coach. Santo found herself in a Los Angeles pound when she was only 5 months old. Kish adopted her and soon it was realized that Santo had major issues lunging and barking at dogs when she was walked on leash. This set Santo and Kish on their path to educate themselves on how to help train highly leash reactive dogs. After much time spent on training protocols, private lessons, group classes and doing their daily homework Santo and Kish are proud to say they can enjoy walks in a variety of busy settings. 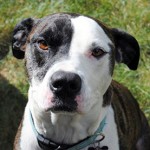 Advocate for second chances. Halas is a master cuddler and artist at finding the best spot on a comfy bed. He was the last dog in a pound that was closing. Kish saw his picture on the internet and figured she could save him and find him a home. Well she did and after joining her family he never left. He is a pretty mellow dog but did have issues with barking at people/dogs if he was behind a fence. With training and a commitment to that training Halas is very much improved with his barrier issues. He wants other dogs and their owners to know that these kinds of issues can be managed and overcome with positive reinforcement training. Rest easy Halas - 7/12/2016. 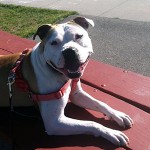 Advocate for rehabilitation and early socialization. Dharma had a very under socialized beginning in life. Because she was so under socialized and chained for the first 2 years of her life she has a hard time meeting new people. Once she is properly and slowly introduced to people she can be very friendly with them. She has a long road ahead of her but she has already come along way. Dharma loves her clicker training and gets excited when it is time to train. Dharma wants every dog and dog owner to know that training can be fun and very rewarding.